Theft crimes in Massachusetts are sometimes otherwise referred to as Property Crimes, because it's property that is inevitably the focus of the specific crime that is charged. There isn't one type of theft crime or property crime, but rather several types. The terms "Theft Crime" or "Property Crime" don't represent crimes themselves, but rather represent a category of several different specific crimes under those categories.

Massachusetts groups a number of different theft crimes into one broad category known as "larceny," with several different sub-categories, the most common of which you can see listed below. If you click on any of those linked crimes from the menu at the end of this page, you will be taken to a separate page discussing that particular theft crime. As a general matter, the specific statute governing "larceny" in Massachusetts is General Laws Chapter 266 Section 30.

When someone takes possession of property belonging to another person without their consent, that act constitutes the theft crime of larceny. The value of the property stolen, and the circumstances under which the property is stolen, determines the specific crime that is charged. Generally speaking, stolen property that is valued at less than $250, is usually classified as petty larceny, which is a misdemeanor offense in Massachusetts. If the stolen property is valued at greater than $250, the law considers the offense to be classified as grand larceny, which is a felony in Massachusetts. Grand larceny can be punished by a maximum sentence of five years in state prison, a maximum fine of $25,000, or a county jail sentence of up to 2 ½ years. Larceny and robbery are not the same: Robbery is a form of larceny, and is discussed in greater detail in the list of crimes below. If you click on it, you'll see a brief discussion of these differences.

In Massachusetts, typical theft crimes or property crimes include the following offenses (this is only a partial list): robbery, shoplifting, motor vehicle theft, embezzlement, burglary, forgery, identity theft, credit card theft, and buying or receiving stolen property. Most involve some degree of the umbrella term of "larceny." If you click on the following crimes below, you can learn much more about each of them: 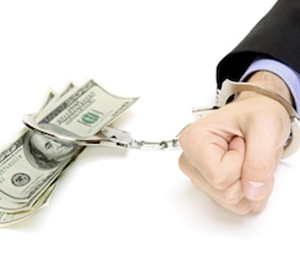 Punishment and sentencing following conviction of these types of crimes varies widely - there is no "one sentence." Depending on the specific offense and the facts surrounding it, a judge could impose jail time ranging from a day in a county jail to several years in state prison. Fines, restitution, community service and probation are all additional possibilities. If the defendant has a criminal record, the likelihood of a more serious sentence increases. If the defendant caused some type of injury or bodily harm during the commission of the offense, to either the victim of the larceny or to a third person, those factors will also increase the penalty. The same holds true if the defendant used some type of weapon in committing the offense. Sentencing and the range of penalties that follow either a guilty verdict or a plea of guilty are largely fact-driven, and depend upon the particular facts surrounding the crime that is committed.

If someone is charged with a Massachusetts theft crime or a property crime, that person is going to need to retain a talented and experienced criminal defense attorney - one who can demonstrate a proven track record of success in defending charges of theft and property crimes in Massachusetts. To choose an attorney who only handles these cases "now and again" is a foolish decision, and anyone who does so, or who chooses an attorney based upon the lowest fee possible, is inevitably going to be sorry. In the legal profession as in any profession, "you get what you pay for."

Don't make that kind of mistake. While our fees aren't among the lowest, our talent is among the highest. We know how to aggressively defend Massachusetts theft crime charges, and we can protect you from Day One. Call us 24 hours a day, seven days a week at Ph.: (781) 320-0062, or contact us online for a free initial consultation, and we'd be glad to let you know what your legal options are, and what we can do for you.

Contact Us
Free Arrest
Tip SheetClick to Download
Practice Areas
Theft Crimes
Client Reviews
★★★★★
When I was arrested for DUI, I was absolutely terrified. Had it not been for you, I might have been convicted of something I was not at all guilty of. My work life, my family life, my reputation, all could have been destroyed. You stood by me like the legal version of a bodyguard - and because of you, I was found not guilty. G.M.
★★★★★
When we got the call that our son had been arrested and charged with rape, we almost fainted. We know our son. He is not violent; he has never abused anyone, let alone another girl… If not for you and your "take no prisoners" attitude, our son might have been convicted of a crime that would have sent him to state prison. As far as we're concerned, our son owes you his life, and we owe you the world. We will never forget you. A.H. and P.H.
★★★★★
I hired Mr. William D. Kickham for a very important legal issue and I was extremely satisfied by the results. His in depth knowledge about the matter and his intelligent thinking was extremely beneficial. He is really an expert. He was also very supportive and sensitive towards my concerns. It was great to have a lawyer of his capacity. Thanks William for all the Help. N.G.
★★★★★
Atty. Kickham defended me on a charge of raping my girlfriend, who made up the whole story out of revenge because I was interested in someone else. If it weren’t for Attorney Kickham proving me innocent, God knows what might have happened to me. Z.B.
★★★★★
Mr. Kickham represented me on a trumped-up charge of domestic violence. The prosecutor and police wouldn’t back down, even after my spouse told them it was all untrue. They insisted on taking me to trial, and Mr. Kickham never wavered. He was my legal bodyguard, and I was found not guilty. M.B.
★★★★★
Of the many talents Atty. Kickham has, two are these: 1) He is ten times as persuasive as the best lawyer you’ve seen in the movies; and 2) Nothing - but nothing - gets by him. The police arrested me on completely false drug charges, and after a heated courtroom battle, Atty. Kickham won the day. Trust me, it was no surprise. D.C.
★★★★★
Because I mildly disciplined my child for throwing a tantrum, I was actually charged with child abuse. It was horrifying. Atty. Kickham fought for me tooth and nail, until I was declared not guilty. One hell of a lawyer. D.D.
★★★★★
I complimented a co-worker on her looks and patted her on the back as I did so. Two hours later, the police showed up and accused me of indecent assault & battery. From the day I hired him, Atty. Kickham fought the DA’s office until the charges were dropped. If not for him, my life would have been ruined. A.K.
Submit a Law Firm Client Review