Drug Possession With Intent to Distribute 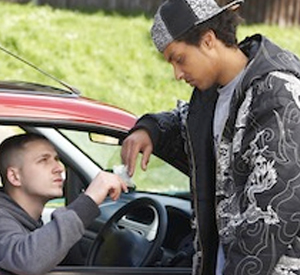 The crime of Possession of Drugs with Intent to Distribute is an extremely serious matter in Massachusetts. It is a felony, and if a conviction results, the possibility of jail time is very high. These drug charges can be very complicated, and if a Massachusetts school zone is involved, the stakes become much, much higher: Mandatory minimum jail sentences often result if a conviction is returned after trial. Very briefly, prosecutors can charge a person with a “school zone violation” if that person is arrested on a Massachusetts drug charge anywhere within 1000 feet of a public or private school, or within 100 feet of a park or playground, regardless of whether the individual had any intention at all of distributing or selling the substance within that zone. In case you might think 1000 feet isn’t that much: It’s over three football fields long. Given the configuration of most cities and towns, it’s highly likely that a school is located within 1000 feet of most drug arrests. That’s one reason why these drug charges can be so serious.

You should know that Massachusetts drug laws do not state a specific amount or quantity of illegal drugs or controlled substances that a person must be found with, in order to be charged with the crime of Possession With Intent To Distribute. A person can be charged with this crime even if very uncertain or vague circumstances surrounded the arrest. Police will often charge a person with this serious offense, if they find even the slightest evidence that you intended to distribute (or sell) the substance involved. They could decide this based on the mere presence of a box of plastic Ziploc bags or the presence of a small weight scale. They could also decide to charge you with this serious offense even if they found 3 or 4 marijuana plants that you were growing for purely personal use. As experienced Boston drug defense lawyers, we’ve seen and successfully defended a lot of cases where drug distribution charges never should have been brought in the first place.

The Massachusetts crimes of “Possession with Intent To Sell” and “Drug Manufacturing” are governed by the same statute, Massachusetts General Laws Chapter 94C, Section 32. As a result of this, both crimes carry the same statutory punishments. This statute prohibits the intentional (or knowing) distribution, manufacture, or possession with intent to manufacture or distribute, a controlled substance in Massachusetts. Click here to be taken to our separate page listing controlled substances in Massachusetts. For obvious reasons, the crime of “Possession with Intent to Distribute” carries much harsher sentencing penalties than the more “straight” or “simple” crime of Unlawful Possession of a Controlled Substance. A conviction following a first offense of Possession with Intent to Distribute Drugs could result in a jail sentence in a House of Correction/County Jail for up to 2 ½ years; or even a sentence to State Prison for as much as 10 years. Depending on the drug involved and which class of controlled substance the drug belongs to, defendants charged with repeat offenses could face severe penalties including minimum-mandatory sentences and lengthy state prison sentences.

Two important notes here: 1) Mandatory minimum sentences mean just what the term implies: If a guilty verdict is returned by a jury, the judge hearing the case has no choice in delivering the sentence: He or she must sentence the defendant to the minimum jail or prison sentence that the particular statute calls for. The judge cannot reduce or change that sentence. 2) There is a major difference between a House of Correction/County Jail, and a State Prison: A House of Correction or County Jail houses mainly low-level and non-violent offenders, usually serving maximum sentences of 2 ½ years or less. A State Prison is an entirely different story: State prisons are meant for the most serious and violent offenders, and the environments within them are extremely harsh.

Penalties for the Crime of Possession With Intent To Distribute:

Because there are a variety of drugs that are considered controlled substances, there is no “one” punishment or penalty that attaches to this crime. Instead, the penalties differ depending on the particular drug that was involved, and the class of controlled substances that the drug belonged to. That having been said, the crime of Possession With Intent To Distribute usually involves the three drugs of heroin, cocaine and marijuana. Hence, we list here the penalties that follow a conviction of this charge involving these three substances, first. A broader list of penalties that attach to convictions of this charge involving other, additional controlled substances follows after these first three substances:

Possession Of Heroin With Intent to Distribute

Heroin is a Class A controlled substance Penalties are governed by Massachusetts General Laws Chapter 94C Section 32. The punishment following a first conviction of this offense ranges from 2 ½ years in a House of Correction/County Jail, to as much as ten years in state prison. In addition to incarceration, there is also a fine of anywhere from $1,000 to $10,000 that a judge can impose. A second conviction carries a mandatory minimum prison sentence of 5 years to a maximum of 15 years.

Possession of Cocaine With Intent to Distribute

Cocaine is a Class B controlled substance. Penalties are governed by Massachusetts General Laws Chapter 94C Section 32A. The punishment following a first conviction of this offense includes 2 ½ years in a House of Correction/County Jail, together with a fine ranging from $1,000 to $10,000. Penalties following a second (or subsequent) conviction carry a 3 year mandatory minimum sentence to state prison, with a possible maximum sentence of 10 years. In addition to incarceration, a judge can impose a fine ranging anywhere from a minimum of $2,500 to a maximum $25,000.

Possession of Marijuana With Intent to Distribute

Marijuana is a Class D controlled substance. Our Massachusetts Drug Possession Page discusses how possession of one ounce or less of marijuana is no longer a criminal offense in Massachusetts. However, that new law deals only with possession of one ounce or less. If an individual is arrested for possessing more than that amount, and police or prosecutors believe that the defendant intended to distribute it, then the offense is governed by Massachusetts General Laws Chapter 94C Section 32C.

The punishment following a first conviction of this offense includes a 2 year sentence to a House of Correction/County Jail and/or a fine of $500 fine. Penalties following a second (or subsequent) conviction carry a minimum sentence of 1 year up to a maximum of 2 ½ years in a House of Correction/County Jail. A second conviction also carries a minimum fine of $1,000, up to a maximum of $10,000 dollars.

Penalties for Possession of Intent To Distribute Other Drugs:

The following are minimum penalties for each class of Controlled Substance:

Make The Right Choice In Hiring An Attorney:

If you or someone you know is being charged with a Massachusetts Intent to Distribute Drugs crime, that person is going to need to hire a talented and experienced Massachusetts drug crimes defense lawyer – one who can demonstrate a proven track record of success in defending Intent to Distribute Drug charges in Massachusetts. Whatever you do, do not hire an attorney that defends these cases only “occasionally” – that would not be a wise decision. Also, do not choose an attorney by “shopping” for the lowest legal fee. That will probably connect you to a very inexperienced lawyer, and you won’t like the legal outcome. What’s true with every other profession is also true with the legal profession: “You get what you pay for.”

Don’t make a mistake that could cost you your future. While our fees aren’t among the lowest, our proven results are among the highest. We know how to aggressively and successfully defend Massachusetts drug distribution charges, and we know how to protect you. Call us 24 hours a day, seven days a week at Ph.: (781) 320-0062, or at Ph.: (617) 285-3600, or contact us online here for a free initial consultation and we’d be glad to let you know what your legal options are, and how we can help you.