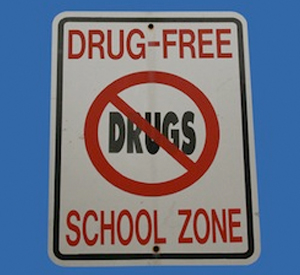 This is one Massachusetts drug offense that, to put it plainly, you “don’t want to mess around with.” In our view, this is one of the worst drug laws on the books in this state, largely because of the extremely severe mandatory minimum jail sentences involved, which can run up to a maximum of 15 years in state prison. This is largely due to the way that the statute was written, in response to enormous public pressure on the Massachusetts Legislature to “do something serious” about drugs and school-age children.

As one sign of just how serious this offense is in Massachusetts, a conviction on a school zone drug violation carries a mandatory minimum prison sentence of two years behind bars. These charges can be a very complicated area of Massachusetts drug crimes, and if you’re charged with this offense, you’re going to need an experienced Massachusetts drug crimes defense lawyer to defend you as soon as possible in order to protect your legal rights and preserve all possible defense strategies.

Massachusetts General Laws Chapter 94C governs this offense, and it provides an additional criminal offense that prosecutors may charge a person with, if and when a defendant is already charged with Possession With Intent To Distribute. Click on that link for a list of penalties for that crime.In effect, it “layers” the two charges on top of each other, and drastically increases the possibility of serving a prison term and being forced to pay very high fines, if convicted. When can prosecutors bring this additional charge of a Massachusetts school zone drug violation? Answer: Any time a person is arrested for Possession With Intent To Distribute, and the offense took place within either 1000 feet of a school or 100 feet of a playground or park. In case you might think that this shouldn’t pose a legal problem for a lot of people, since the average person doesn’t see himself as someone who hangs around schoolyards with the intent to sell illegal drugs to young kids, you’d be wrong. Why does the law pose such a risk to “non drug-dealers,” or recreational drug users? Because:

A defendant who has been convicted of a Massachusetts school zone drug violation will be sentenced to state prison for a term of anywhere from a minimum of 2 ½ years to a maximum of 15 years, or alternatively to a County Jail/House of Correction for a minimum term of 2 ½ years. Under all circumstances following a guilty verdict, there is a mandatory minimum prison or jail sentence of 2 years. This is for the school zone drug violation alone, in addition to any sentence for a Possession With Intent To Distribute charge or a Massachusetts Drug Trafficking charge. Above and beyond a prison or jail term, a fine of a minimum $1,000.00 to a maximum $10,000.00 will also be imposed. A note about “mandatory minimum sentencing”: This term means that, following a guilty finding, a judge has no choice but to sentence a defendant to one of the above mandatory minimum periods of incarceration. The judge cannot show any mercy, or exercise any discretion in sentencing. Also, there is a major difference between a County Jail/House of Correction, and a State Prison: County Jails typically house lower-level offenders who are not generally very violent. State prison is altogether different: Trust us, you don’t want to end up there.

You can see the severe approach to this offense. The legislative objective of this law is to ensure that school zones are drug-free, and the courts have very little tolerance for defendants convicted on this charge. If you or someone you care about is facing this charge or other Massachusetts drug offenses, the decision you make about who to hire as your attorney will literally determine your future. It would be extremely unwise to choose an attorney that handles these serious drug cases only “occasionally.” It would be just as unwise to “shop” for the lowest legal fee available. You will probably get an inexperienced attorney, who will produce a very substandard result. The proven maxim, “You get what you pay for,” applies to the legal profession just as it does for any other profession.

Don’t make a serious mistake that could potentially destroy your future. Our proven results are among the best in the legal profession in Massachusetts. We know how to very aggressively and successfully defend Massachusetts School Zone drug charges and we know how to make sure you are legally protected to the maximum extent possible. We have been very successful in securing either acquittals on these charges, or in reducing the charges to eliminate the exposure to a mandatory minimum prison or jail sentence. Call us 24 hours a day, seven days a week at Ph.: (781) 320-0062, or at Ph.: (617) 285-3600, or contact us online here for a free initial consultation and we’d be glad to let you know what your legal options are, and how we can help you. The sooner we can start protecting you, the better off you are going to be.