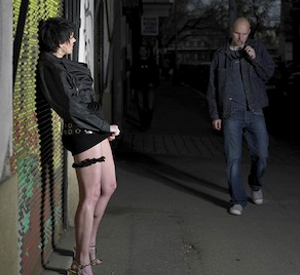 Because they are so closely related legally, we’re going to list the three crimes of Prostitution, Soliciting and Pimping on one page. All three of these crimes are governed by Massachusetts General Laws Chapter 272.

For both alleged prostitutes and their customers, a conviction on a charge of engaging in sexual conduct for a fee carries imprisonment of as much as one year in a House of Correction/County Jail, or a maximum fine of $500, or both. Importantly, this punishment is drastically increased if the transaction or agreement involved a child under the age of 14. In this situation, a defendant can be sentenced to as much as 10 years in a state prison, or a maximum of 2 ½ years in a House of Correction/County Jail – whether any sexual conduct occurred or not.

Soliciting for a prostitute is prohibited by Section 8 of Massachusetts General Laws Chapter 272. The law criminalizes (1) soliciting a prostitute; and (2) receiving any compensation for the act of soliciting a prostitute. This statute is aimed more at prostitutes’ customers, or, as they are commonly referred to by police, “Johns.” Convictions of this offense carry punishments of imprisonment in a County Jail/House of Correction for a maximum of up to one year, or a maximum fine of $500, or both.

“Pimping,” legally, is known as “Deriving financial support from prostitution,” and it is prohibited by Section 7 of Massachusetts General Laws Chapter 272.

In order to secure a conviction of this offense, the prosecution must prove beyond a reasonable doubt the following legal elements:

Again, this law is aimed at pimps and their activities. A conviction of this offense carries a minimum sentence of five-years in state prison together with a $5,000 fine. Importantly, a judge cannot reduce this sentence to less than two years, and there is no eligibility for either parole or probation until at least two years of the sentence are first served.